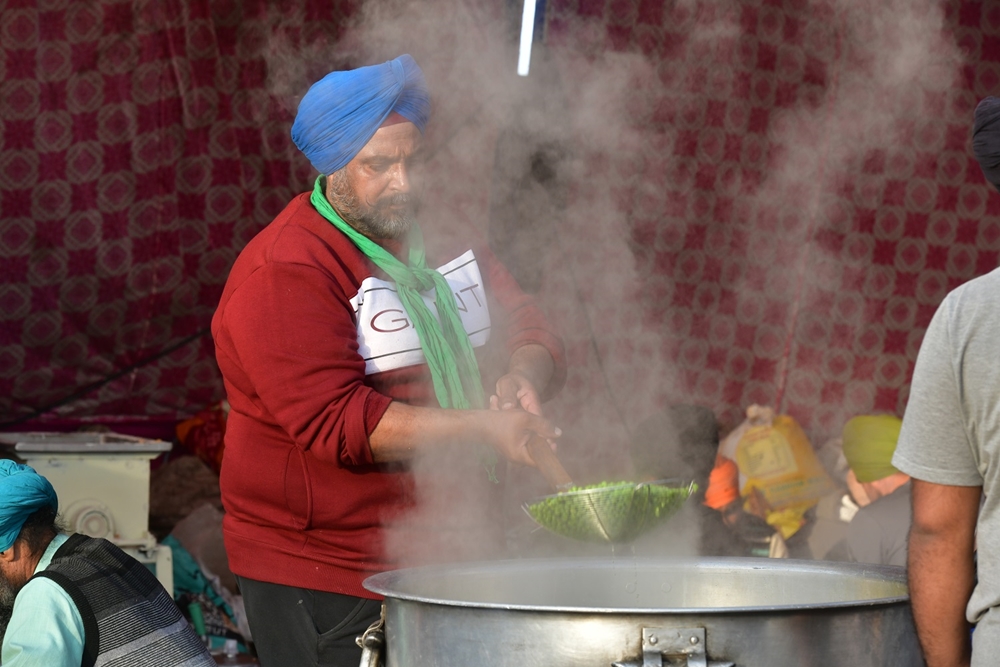 With harvesting done, hundreds of farmers are reaching Delhi’s outskirts in solidarity with protestors of the Centre’s farm laws. This is in addition to the hundreds already camping at the protest sites.

It is by no means an easy task feeding thousands of men and women at these locations. Volunteers are busy organising ingredients to keep the makeshift langars (community kitchens) working.

Their leaders had called out for ‘a handful of grain’ from households supporting the cause. Answering that call, tractor-trailers can be seen emptying tonnes of wheat near places earmarked for storage.

Haryana’s Manjit Rai was one such farmer who delivered a trailer-load of wheat to a dhaba (roadside eatery) which has since closed for regular business.

“He’s spending lakhs a day to feed farmers without caring for profits,” said the Bharatiya Kisan Union (BKU) leader on a Facebook post.

Inside the dhaba, additional space has been created to host some participants reaching the protest site, especially women. And the kitchen now serves as a ‘langar’.

Part of the wheat reaching here – an estimated amount for consumption – is sent for grinding almost daily, while the rest is stored in makeshift godowns. According to volunteers at the site, after grinding the wheat, flour cannot be stored for a long time.

The flour is then ferried to the langars nearby at Singhu border for making ‘roti’.

At Tikri border, like many others, Gurpreet starts off by cataloguing daily life for his social media post. A major part of such records comprises matters related to food and shelter.

At some places, people living nearby bring vegetables, grains, and sometimes even cooked food for the protestors.

It’s been a long haul, and it may be a longer haul yet. And a famer cannot continue a stir with an empty stomach. Thus, a dedicated group of youth are entrusted with the responsibility of keeping the kitchen fire burning.

The protests have been going on since end-November, with farmers seeking complete repeal of the three laws brought in by the Centre. They also want the Electricity (Amendment) Bill 2020 be revoked and demand legalisation of Minimum Support Price (MSP).