Meeting With Farmers Remains Inconclusive, Next Meeting Likely On Dec 5

Some union leaders threaten to boycott any further meetings if no solution was found at Thursday's meeting. 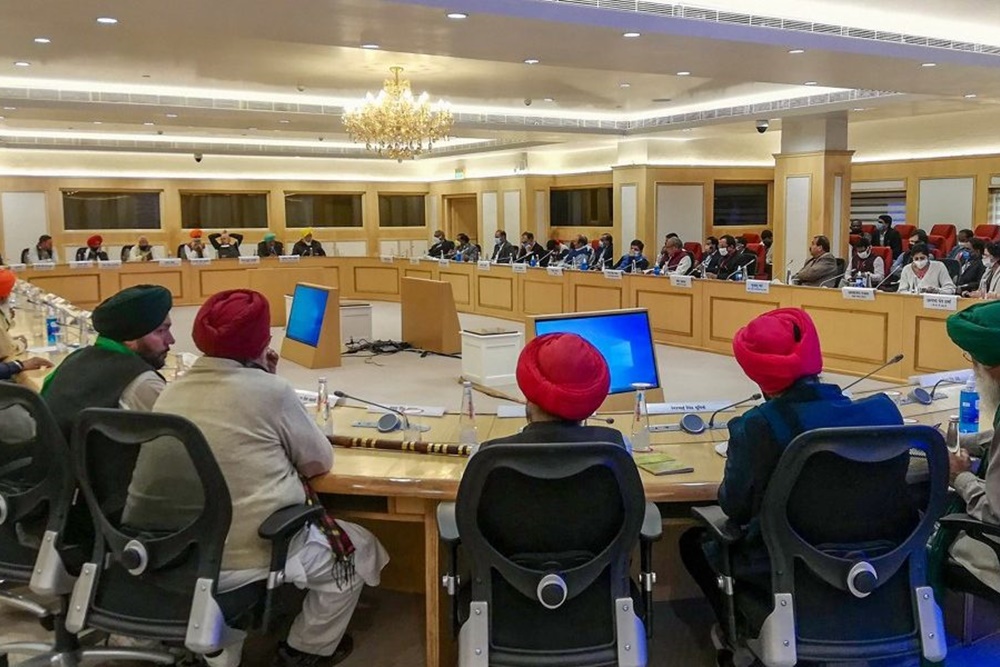 Leaders of various farmer organisations during a meeting with Union Agriculture Minister Narendra Singh Tomar over the new farm laws, in New Delhi.

Talks between three union ministers and a representative group of thousands of agitating farmers failed to yield any resolution on Thursday, as the union leaders stuck to their demand for the repeal of new farm laws and even refused the lunch, tea and water offered to them during almost eight-hour-long hectic parleys.

On its part, the government assured the group of nearly 40 farmer leaders that all their valid concerns would be discussed and considered with an open mind, but the other side flagged several loopholes and deficiencies in the laws, which they said were passed hastily in September.

Agriculture Minister Narendra Singh Tomar, who led the government side at the fourth round of talks at Vigyan Bhawan, later told reporters that the next meeting will take place on Saturday at 2 pm.

He also said there is "no ego involved" and the government has agreed to "discuss and consider with an open mind open" all major points of concerns among farmers about the three new laws, including on strengthening of the APMC (Agriculture Produce Marketing Committee) mandi system, tax parity with proposed private mandis and freedom for farmers to approach higher courts for any dispute resolution.

The government will also be open to looking into farmers' concerns related to an ordinance on stubble burning and an electricity-related law, Tomar said.

A government source said the meeting would resume on Saturday as no final outcome could be reached due to paucity of time.

Union leaders, who came out of the meeting venue shouting slogans, said the talks remained deadlocked and some of them threatened to boycott any further meetings if no solution was found at Thursday's meeting.

"Discussions are over from our side. Our leaders have said they will not attend further meetings if a solution is not given today by the government," said Pratibha Shinde, AIKSCC (All India Kishan Sangharsh Coordination Committee) working group member and president of Lok Sangharsh Morcha, which represents farmers of Maharashtra and Gujarat.

Another farmer leader Kulwant Singh Sandhu said the government made many proposals including on MSP and procurement system, which would be discussed among the farmer organisations on Friday, before the next meeting with the government on Saturday.

AIKSCC General Secretary Hannan Mollah said the main demand of the unions remains the repeal of the three Acts and the government also listened to the 8-10 specific deficiencies pointed out by the farmer leaders.

"We do not want any amendment. We want the Acts to be repealed," he said.

Mollah said all farmer organisations would meet on Friday at 11 am to take a collective call for the next round of talks with the government.

The government gave a detailed presentation on the three laws and asserted its intent towards the welfare of the farmers.

However, the union leaders rejected the government's position. Besides Tomar, the government side included Railways, Food and Consumer Affairs, and Commerce and Industry Minister Piyush Goyal; and Minister of State for Commerce Som Parkash, who is also an MP from Punjab.

The 40 farmer leaders present at the meeting refused the lunch offered by the government and preferred to eat the food ferried in a van from the Singhu border, where thousands of their colleagues are sitting in protest against the new agri laws.

They also did not accept tea and water offered to them during the meeting, which began around mid-day.

The previous round of talks had taken place on December 1, but had ended in a stalemate even after three hours of discussion as farmers' groups rejected the government's suggestion of a new committee to look into their issues.

The government had rejected the demand for repealing the laws and asked the farmers' bodies to identify specific issues related to the newly enacted Acts and submit those by December 2 for consideration and discussion on Thursday.

Enacted in September, the laws have been presented by the government as major reforms in the agriculture sector by removing middlemen and allowing farmers to sell anywhere in the country.

However, the protesting farmers have been worried that the new laws will eliminate the safety cushion of a Minimum Support Price (MSP) and procurement system, while rendering ineffective the mandi system that ensures earnings for various stakeholders in the farm sector.

On Wednesday, agitating farmers had demanded that the Centre convene a special session of Parliament and repeal the new farm laws as they threatened to block roads in Delhi and "take more steps" if it failed to do so.

During their marathon meeting on Thursday, farmers' leaders told the government to focus on resolving the issues instead of trying to be a good host by offering lunch, Shinde said.

"How can we have lunch offered by the government when our fellow farmers are sitting on roads," said Shinde, whose organisation is among the 40 farmers' groups engaged in the talks.

Thousands of farmers have been camping at the Singhu and Tikri borders of the national capital for eight days as part of their protest against the laws. But protests have been continuing for much longer in other parts, especially in Punjab.

After the meeting, Tomar told reporters, "Discussions were held in a cordial atmosphere where the union leaders presented their side and the government also gave its views. A few major points of concern among farmers have emerged after the four rounds of talks."

The minister said the government has always maintained that it is fully committed to farmers' welfare and will remain so.

"There is no ego involved on the government's side and we have been discussing each and every issue with the farmer unions with an open mind," he said.

Tomar further said farmers and their unions are worried that the new laws will end the APMC system.

"The government will consider ways to strengthen the APMC framework and it becomes of greater use. As far as the new Acts are concerned, there are provisions for private mandis outside the purview of the APMC. Those private mandis would be set up and we will discuss how there could be a tax parity between these private ones and those set up under the APMC Act," he said.

We will also ensure that all traders are registered for operating outside the APMC mandi system, the minister said.

"The new Acts also have a provision that any dispute will go to SDM (Sub-Divisional Magistrate) court, but the unions want freedom for going to higher courts. The government has also agreed to discuss and consider this point with an open mind, as unions stressed a lot on this issue," he said.