Security was stepped up after farmers threatened to block more highways connecting the national capital. 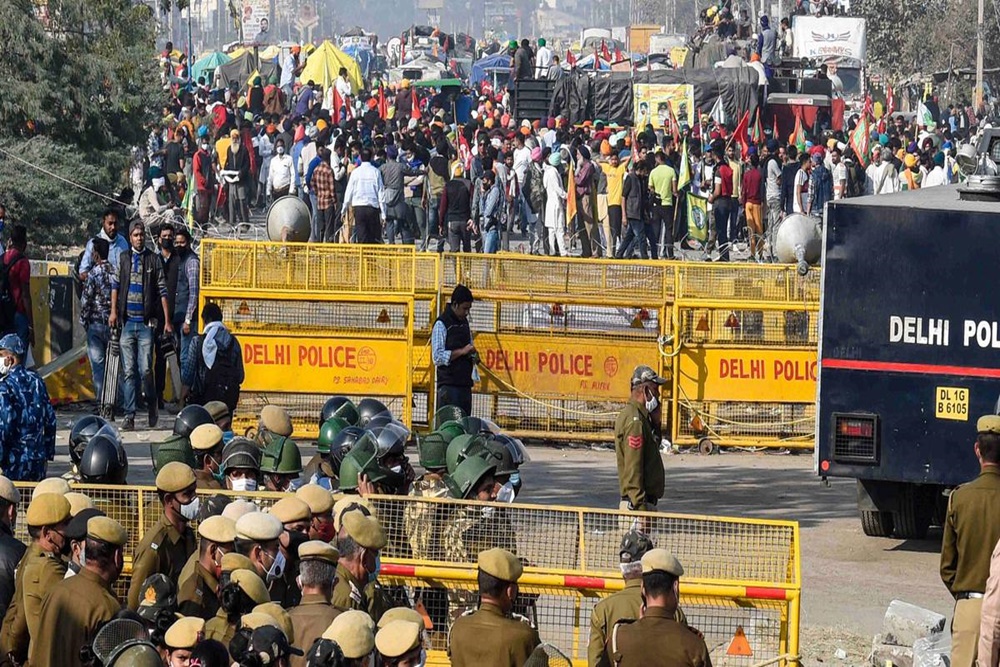 Delhi Police placed concrete barriers and enhanced security at the Ghazipur border with UP as the number of protesting farmers swelled there while thousands more remained at the Delhi-Haryana border for the fifth day Monday to protest against the Centre's agricultural reform laws.

Security was stepped up after farmers threatened to block more highways connecting the national capital.

Peaceful protests were underway at both the Singhu and Tikri borders with no untoward incident reported for the last two days, but the numbers of farmers at the Ghazipur border swelled, with more their counterparts from the state joining them.

Rejecting the Centre's offer to hold talks once they move to the Burari ground, the farmers protesting at all Delhi border points said they will not accept any conditional dialogue and have called a meeting to discuss their next course of action later in the day.

Farmers, who had reached Nirankarai Samagam Ground in Burari on Saturday, continued their protest there.

A Delhi Police officer said the situation at the Ghazipur border near UP Gate remained peaceful.

He said, "Cement jersey barriers have been placed to prevent the protesting farmers from entering the national capital.

"The protestors do not wish to go to Burari ground and want to carry out their protest at Jantar Mantar," he said.

However, the Delhi-Ghaziabad border has not been sealed, police said.

Sukhwinder Singh, who has been agitating at the Tikri border for the fifth consecutive day, said farmers will continue to protest at the Delhi borders as they don't want to go to Burari ground --- a designated protest site identified for the demonstration.

"We have enough ration to sustain for at least six months. We do not wish to go to Burari. If we proceed from here, we will only go to Jantar Mantar. We will not protest anywhere else," Singh said.

He said that they are ready for talks with the Centre, but if they do not find solutions despite talks, they will block all the ways leading towards Delhi.

A medical camp has also been set up at Singhu border, which is being run by two individual doctors.

Dr Sarika Verma, who has come from Gurgaon, said, "We have come here today. We are helping farmers at our own level. We have blood pressure medicine, PCM, crocin and other medicines."

"The farmers are not so much aware of Covid-19. Many of them are not wearing masks, which poses a threat to human lives. We are distributing masks especially to those who have a cough and the elderly here," Verma said.

Another doctor Karan Juneja said that he has distributed basic medicines to 300 farmers, adding that there is a need to conduct the Covid-19 test at the protest site.

Traffic continued to be disrupted in the national capital due to the protests.

Taking to Twitter, the Delhi Traffic Police on Monday alerted commuters to take an alternate route since Singhu and Tikri borders continued to remain closed.

Union Home Minister Amit Shah had appealed to the farmers to shift to the Burari ground and had said the Centre was ready to hold discussions with them as soon as they move to the designated place.

A meeting of over 30 farmer groups was held to discuss Shah’s offer for talks before the scheduled date of December 3 once they move to Burari in the city, but the thousands of protesters had refused to budge and spent another night in the cold at the Singhu and Tikri border points.

Their representatives had said that Shah’s condition that they shift the protest is not acceptable and claimed Burari ground is an "open jail".

Union Home Secretary Ajay Kumar Bhalla in a letter to 32 farmers organisations sent on Saturday cited the cold conditions and the Covid-19 outbreak and said the farmers should move to the Burari ground where adequate facilities have been made for them.

"As soon as you shift to the ground at Burari, the very next day a high-level committee of union ministers will hold talks at Vigyan Bhavan with the representatives of all farmers unions, with whom dialogue had taken place earlier,” he had said in the letter.