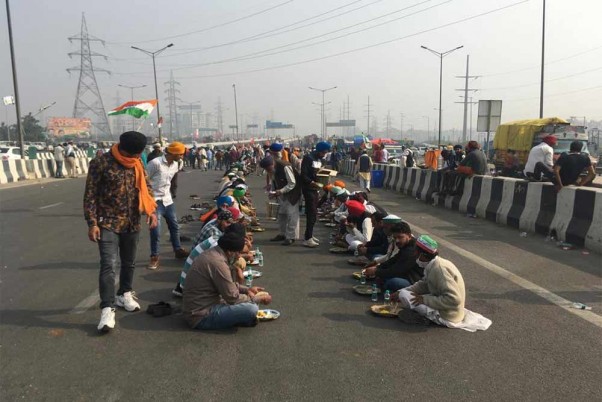 Farmers have their meal during their protest against the Centre's new farm laws, at Ghazipur Delhi-UP border in New Delhi.

A key route connecting Noida and Delhi was completely closed on Saturday as farmers opposing the Centre's new farm laws intensified their stir at the border.

The Delhi-Noida Link Road via Chilla border had one carriageway (Delhi to Noida) open until Saturday morning, however, the protesters blocked it at around 11 am.

Deputy Commissioner of Police (Traffic) Ganesh Saha said, "The closure of the route is not official and we are assessing the situation."

The district traffic police had earlier advised commuters to opt for the Delhi-Noida Direct expressway or Kalindi Kunj routes instead of the Chilla border to travel to and fro Delhi.

Thousands of farmers are currently staying put at Delhi's borders with Haryana and Uttar Pradesh in protest against the Farmers' Produce Trade and Commerce (Promotion and Facilitation) Act, 2020, the Farmers (Empowerment and Protection) Agreement on Price Assurance and Farm Services Act, 2020 and the Essential Commodities (Amendment) Act, 2020.

They have expressed apprehension that these laws would pave the way for the dismantling of the minimum support price system, leaving them at the "mercy" of big corporations.

However, the government has maintained that the new laws will bring farmers better opportunities and usher in new technologies in agriculture.