The AAP government has denied permission to Delhi Police to convert the city's stadiums into temporary jails as farmers continued to push towards the national capital protesting the farm laws. 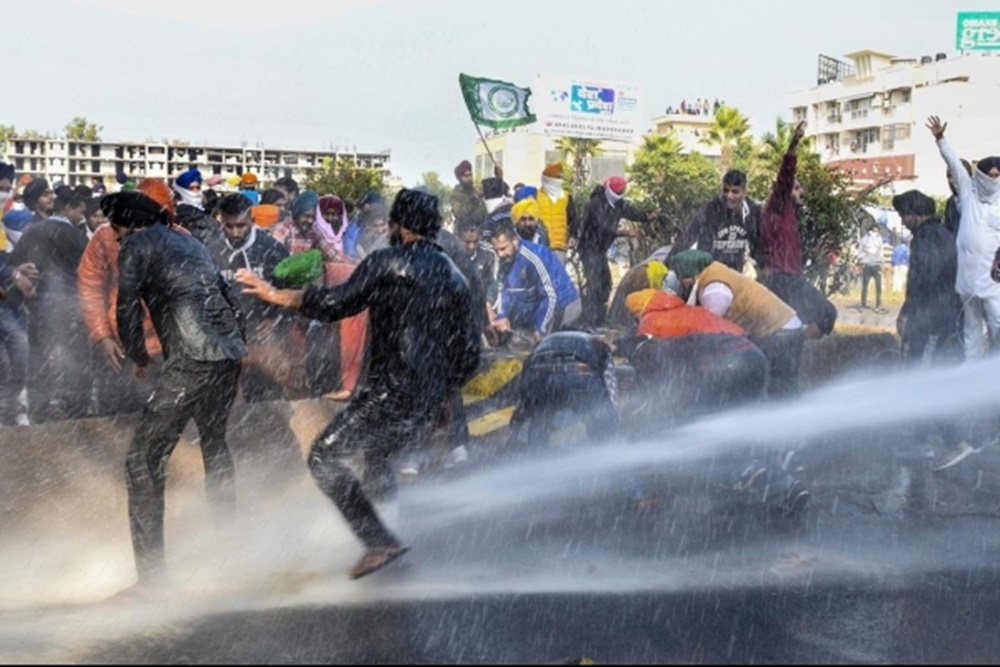 The Delhi Police used tear gas at the Singhu and Tikri borders to disperse protesting farmers as they tried to enter the national capital on Friday. Police have enhanced deployment of security personnel, stationed sand-laden trucks and water cannons and used barbed wire for fencing at the Singhu and Tikri border points (Delhi-Haryana border) to prevent the protesters from entering the city. Police said they will not allow the agitating farmers to enter Delhi.

Meanwhile, the AAP government on Friday denied permission to the Delhi Police to convert the city's stadiums into temporary jails as farmers continued to push towards the national capital on their “Delhi Chalo” march against the Centre's farm laws. While rejecting the Delhi Police's request, Delhi Home Minister Satyendar Jain said that every Indian citizen has a constitutional right to protest peacefully for which they cannot be put in jails. In a letter to the principal home secretary, Jain said that the central government should accept the demands of the protesters, adding that putting farmers in jails is not the solution. Earlier, the Delhi Police had sought permission from the AAP government to use the city's nine stadiums as temporary jails for the agitating farmers.

Farmers from Punjab faced water cannons and broke police barriers at the state's borders as they pushed towards the national capital Thursday on their “Delhi Chalo” march against the Centre’s farm laws.

There were traffic snarls during the day at Delhi’s border with police checking vehicles coming in from Haryana and Uttar Pradesh. Metro services between Delhi and NCR areas were restricted. Haryana Police chief Manoj Yadava said his force acted with “great restraint”. Protesters hurled stones at many places, the DGP said in a statement. “In this entire episode, not only a number of police personnel were injured, but police and private vehicles were also damaged.”

In Karnal, a farmer was injured when a teargas shell hit him. No arrests were reported. At the Punjab-Haryana Shambhu border, police and Punjab farmers in their tractor-trolleys were locked in a confrontation for a couple of hours in the morning. Police made announcements on loudspeakers asking the farmers assembled on the Punjab side to disperse. But as protesters tried to push through barricades, the Haryana Police used a water cannon and lobbed teargas shells. Farmers chucked some steel barricades into the Ghaggar river from the bridge where they had been stopped.

Apart from this confrontation in Ambala district, there were face-offs between the protesters and police in Haryana’s Sirsa, Kurukshetra, Fatehabad and Jind districts bordering Congress-run Punjab. Police had placed cement and steel barricades and parked trucks on the road to stop the farmers’ tractor-trolleys, some of them laden with food for the planned two-day protest, which many felt could extend further. But a few hours later, at most border-points, the farmers were let through.

At Shambhu, a few protesters initially managed to cross the barricades on foot. Later, police eased the blockade, allowing the tractors to proceed on the road to Delhi, 200 km away. But barricades were also set up at other points on this Amritsar-Delhi highway that passes through BJP-run Haryana. At Karnal, there was another face-off and police again used a water cannon.

By Thursday afternoon, several groups of protesters – from Punjab and Haryana – were travelling towards Delhi on tractor-trolleys. Police diverted private vehicles and long lines of trucks were parked on the road. “It is condemnable that Haryana Police is using such measures to suppress an assembly of peaceful protesters. We are protesting in a peaceful manner, but they want to prevent us from using our democratic right to protest,” a Punjab farmer told reporters earlier at Shambhu.

Police used water cannons also against protesters trying to enter Kaithal district, and at Khanauri border where farmers were protesting under the banner of Bhartiya Kisan Union (Ekta-Ugarhan).

Punjab Chief Minister Amarinder Singh and his Haryana counterpart Manohar Lal Khattar exchanged words over Twitter. The Congress veteran asked Khattar why his government was stopping farmers, and the BJP leader told him to stop “inciting” them. Shiromani Akali Dal leader Sukhbir Singh Badal too criticised attempts to thwart the protest. “Today is Punjab's 26/11. We are witnessing the end of the right to democratic protest,” he tweeted.

Ahead of the protest, Haryana had announced sealing its borders with Punjab to prevent farmers from entering the state on their way to Delhi. The Delhi Police had also made it clear that they had denied permission to the farmer organisations planning to protest in the capital on November 26 and 27. In Gurgaon, Swaraj India president Yogendra Yadav and a group of protesters were detained by police while they were on their way to Delhi. In Delhi, commuters from Haryana and Uttar Pradesh complained of traffic jams due to police checks.

"I had to go to Noida regarding a case in the morning. While I was returning from there in the evening, there was heavy traffic at Delhi-Noida border," advocate Rohit Tomar said. "Police personnel were checking vehicles. I was stuck there for almost half an hour," he added.

Punjab farmers, representing over 30 farm bodies, had announced they will go to Delhi through several routes -- Lalru, Shambhu, Patiala-Pehowa, Patran-Khanauri, Moonak-Tohana, Ratia-Fatehabad and Talwandi-Sirsa. Farmer bodies said they will hold a dharna wherever they are stopped from moving towards the national capital.

BKU (Ekta-Ugarhan) general secretary Sukhdev Singh Kokrikalan had claimed 25,000 women will participate and over 4,000 tractor-trailers were arranged for the protest.

The farmers are demanding the repeal of the new laws which deregulate the sale of agriculture produce. They say the laws will lead to the dismantling of the minimum support price (MSP) system.