'Many issues are ailing the country and the students want to create awareness about them,' said a DU student 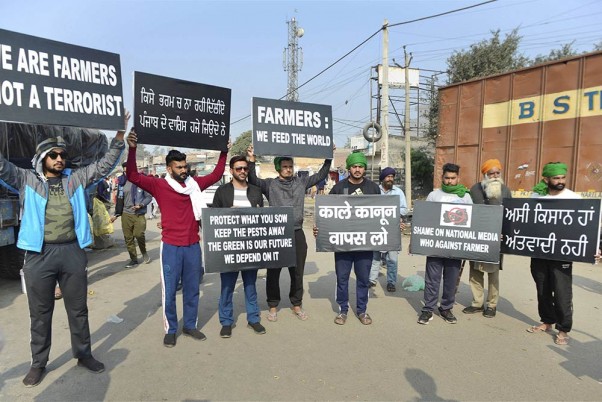 Students from Delhi on Tuesday put up posters and pictures at Singhu Border to highlight the plight of farmers across the country and create awareness on a range of issues.

Ravinder Singh (22), a student of Law Faculty at Delhi University, said many issues are ailing the country and the students want to create awareness about them.

"We have many issues concerning the farmers, women, students, labourers among others. We need to address them all. We are making posters in various languages like English, Hindi, Urdu and Punjabi so that the people can read and understand what we are talking about," he said.

Earlier, students from different universities in the national capital joined the protesting farmers at Singhu border by singing songs highlighting their condition.

Rajveer Kaur, a student of Punjabi Department at Delhi University, said people were given sheets and colours to make posters in support of the farmers.

"Apart from the students, many others have extended their support and shown interest in making posters. They were welcomed and given sheets and colours to make the posters," she said.

Stating that women farmers face different set of problems, another Delhi University student Sangeeta said they should also participate in the protest and lead from the front.

"There are more women at Tikri border, but they are primarily doing cooking. We have made posters highlighting the same. There should be active participation of women in the protest," she said.

The posters were displayed on a wire tide on a truck later in the evening.

Thousands of farmers have stayed put at various border points of Delhi in protest against the Centre’s new agriculture reform laws.