Five Rounds Of Talks, 'Maun Vrat' By Farmers Yield No Result, Next Meeting On Dec 9 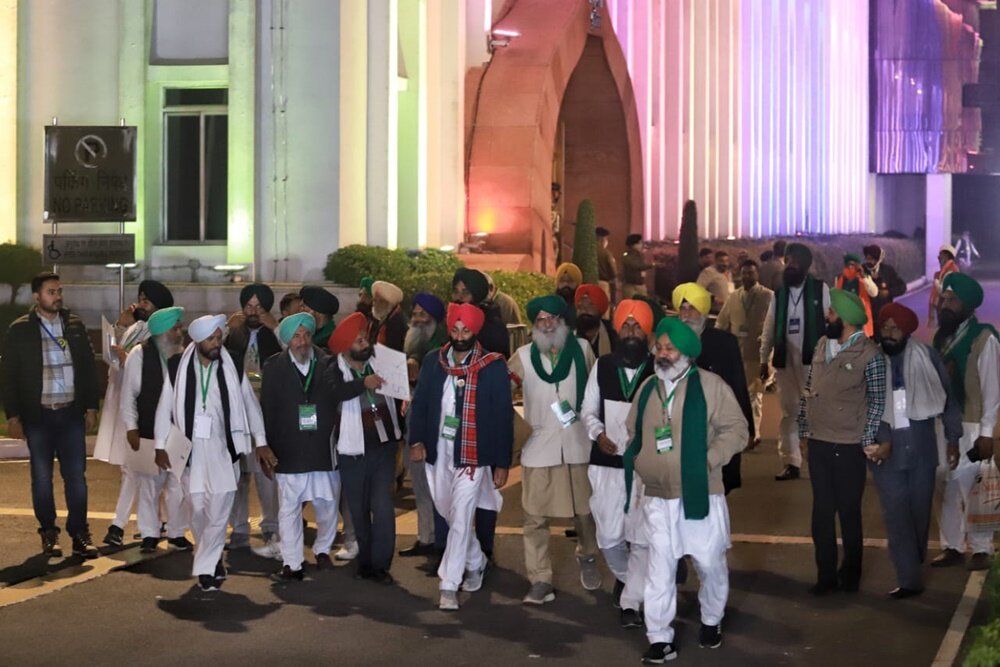 Farmer leaders from all farmer unions coming out at Vigyan bhawan during a meeting with Union ministers over farm bills issue, in New Delhi on December, 05-2020.

Talks between the government and protesting farmers remained inconclusive on Saturday even after five rounds of discussions as union leaders stuck to their demand for the repeal of the new farm laws and went on a 'maun vrat' seeking a clear 'yes or no' reply, forcing the Centre to call for another meeting on December 9 to resolve the deadlock.

After more than four hours of discussions with three Union ministers and senior officials, farmer leaders said the government sought more time for internal consultations to present a final proposal in the next meeting to resolve the issue.

Agriculture minister Narendra Singh Tomar, however, said the government wanted some firm suggestions from the 40 farmer leaders present in the meeting on their key concerns and hoped that a resolution would be reached with their cooperation.

The representatives of thousands of agitating farmers, who are sitting on various borders of the national capital since November 26, said their protest will continue and their call for a 'Bharat Bandh' on December 8 that has also been supported by trade unions and various other organisations -- a day before the sixth round of talks -- would be observed with full force.

Tomar, who led the talks from the government side along with Railway, Commerce and Food Minister Piyush Goyal and Minister of State for Commerce Som Parkash, appealed to the unions to send the elderly, women and children back to their homes from the protest sites due to cold weather conditions.

Addressing media after the meeting, the agriculture minister said the government has assured the farmers that procurement at minimum support price will continue and mandis will be strengthened.

"We wanted some firm suggestions from farmer leaders on some key issues, but couldn't get those in today's meeting. We will meet again on December 9. We have told them that the government will consider all their concerns and our efforts will be to find a solution," Tomar said.

"It would have been easier if they had given those suggestions today itself. We will wait for their suggestions," he added.

He also thanked the farmer unions for maintaining discipline in their agitation, but urged them to leave the path of protest and engage in dialogue. He said the Modi government is always committed to farmers' interests and will remain so.

The three negotiating ministers, along with their senior colleagues Rajnath Singh and Amit Shah, had also called on Prime Minister Narendra Modi to deliberate over likely proposals for the agitating groups.

Farmers have threatened to intensify their agitation and block more roads leading to the national capital if the government does not accept their demands.

The three farm laws have been presented by the government as major reforms in the agriculture sector that will remove the middlemen and allow farmers to sell anywhere in the country.

However, the protesting farmers have expressed apprehension that the new laws would pave the way for eliminating the safety cushion of Minimum Support Price and scrap the mandis, leaving them at the mercy of big corporates. The Centre has maintained the MSP and mandi systems would continue and would be rather further improved and strengthened.

At the meeting at Vigyan Bhawan, farmers' representatives had their own food and tea, as they had done on Thursday during the previous round of talks, and at one point of time threatened to walk out of the discussions if the government was not ready to accept their main demand of repealing the three contentious laws.

Towards the end of the meeting, the farmer leaders went on a 'maun vrat' (vow of silence) for about one hour while keeping a finger on their lips and holding a paper in another hand with "Yes or No" written there.

After the meeting, BKU Ekta (Ugrahan) President Joginder Singh Ugrahan told PTI the government offered various amendments in the laws but we want the laws to be repealed completely.

Onkar Singh Agaul, Bharatiya Kisan Union (Rajewal) general secretary, said we were on a 'maun vrat' as the government was not giving us a clear-cut reply on whether it will repeal the farm laws or not.

One union leader said the government told them that they will first send the proposal to farmers' representatives and they will come for the next meeting after studying those.

He also said the farmer leaders have not given any indication of backing down on their demands, but they could see a change in the government's attitude in favour of ending the logjam.

All India Kisan Sabha, later said in a statement, it condemns the "deliberate prolonging of the talks" and alleged that the government was working at the behest of corporates.

It said lakhs of farmers are already on streets in this biting cold and the government's delaying tactics would result in much greater participation and solidarity from all sections of the society.

As the meeting resumed after a tea break in the evening, the farmer leaders threatened to walk out if the government was not willing to scrap the three laws enacted in September.

While the government managed to convince them to continue with the talks, sources said some kind of division emerged among the participating farmer leaders on some proposals made by the ministers.

Later in the evening, the ministers began talking to smaller groups of 3-4 farmer leaders, out of the total 40 representatives present there, sources said.

At the beginning of the meeting at Vigyan Bhawan, Tomar told the group of farmer unions that the government is committed to cordial talks and welcomed all positive feedback on the new farm laws, sources said.

Later, Som Parkash, an MP from Punjab, addressed the leaders in Punjabi and said the government understands the sentiments of Punjab.

"We are ready to address all your concerns with an open mind," a source quoted Parkash as telling the union leaders.

Outside the meeting venue, employees of the Indian Tourist Transporters Association (ITTA), which has supplied vehicles for the transit movement of the protesting farmers, were seen holding a banner which read 'We support farmers' and shouting slogans backing the peasants' agitation.

On Thursday also, the talks had failed to yield any resolution, as union leaders stuck to their demand for the repeal of new farm laws despite the government offering to "discuss and consider with an open mind" some key points of concern raised by farmers in the three new laws.

The first round of talks had taken place in October, but the farmer leaders had walked out from that meeting as no minister was present. This was followed by the second round on November 13. The last three rounds have taken place after thousands of farmers, first from Punjab and Haryana and later from other states as well, laid siege to various borders of the national capital.