From Delhi’s Boat Club To Ghazipur Border; From Father Tikait To The Son

The Tikaits were from a non-descriptive village Sisauli in the then Muzaffarnagar district – the Jat hinterland in Western Uttar Pradesh. 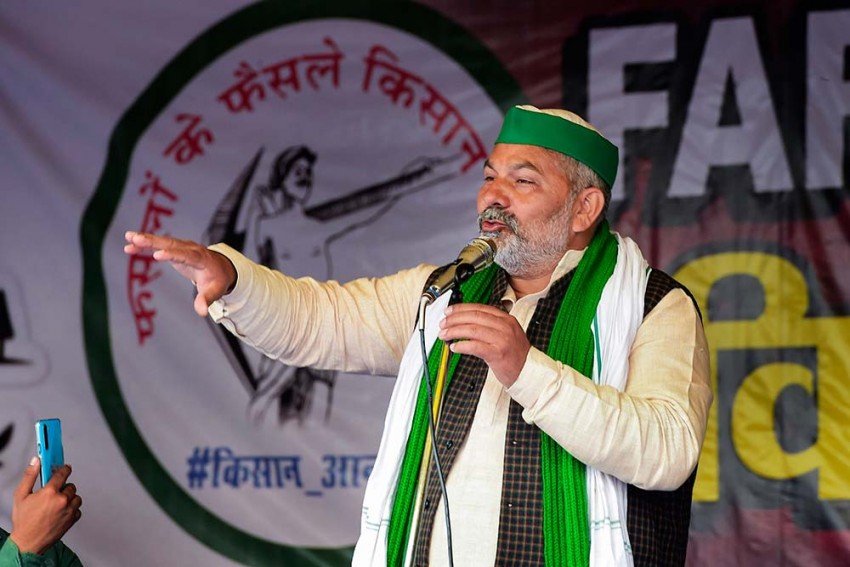 The family name assumed significance when in 1987 Mahendra Singh Tikait organised a campaign in Muzaffarnagar demanding the waiving of electricity bills for farmers.

The Tikaits were from a non-descriptive village Sisauli in the then Muzaffarnagar district – the Jat hinterland in Western Uttar Pradesh.

The next year, Tikait sprang a surprise by holding a well-attended dharna outside the office of the Commissioner at Meerut, then divisional headquarter.

This time, the sit-in demonstration was held to highlight their demand for a hike in sugarcane MSP.

However, his most spectacular show was at Delhi's Boat Club lawns where the Meerut protests soon spread out.

Lakhs of farmers from Uttar Pradesh occupied the stretch from Vijay Chowk to India Gate in the national capital.

There was hardly any news television, and there was no Internet journalism – media meant print – there were newspapers and magazines. But Tikait’s organisation Bharatiya Kisan Union (BKU) grew.

Soon the political pressure mounted by the farmers rose to a degree that proved too hot for Delhi's power elite to handle.

After a week, the then Union government led by Rajiv Gandhi accepted his charter of demands that included higher prices for sugarcane and the waiving of electricity and water charges for farmers.

Then chief minister of Haryana, Devi Lal – another towering Jat leader – had, however, dismissed Tikait’s efforts saying that the fight should have been to acquire political power first.

Once we get political power, he had stated, we shall not look towards the state for the remunerative price for agricultural produce.

However, Tikait – with his signature hookah – succeeded in attracting the attention of Delhi-based experts, academicians, and media persons of that time.

He wielded considerable clout also as the “Chaudhary” of Baliyan khap (sub-caste) – a title he inherited at the age of eight after his father's death.

In July 1990, Tikait followed up with a protest in Lucknow with over two lakh farmers. This time again the demand was for higher sugarcane prices and heavy rebates in electricity dues.

And again, the pressure he exerted made the then state government of Janata Dal bow to his demands.

Mahendra Singh Tikait was back in Lucknow two years later. He led a sit-in panchayat protest for a month this time. His demand was for the government to write off farmers' loans up to Rs 10,000.

As a farmer leader, Tikait did succeed in getting the government come to the negotiation table, in getting his demands heard.

He could call protest rallies of farmers in various places of Western Uttar Pradesh. He could get his followers to disrupt train and vehicular traffic from time to time to put on the pressure. He could travel to Lucknow anytime to take the fight right to the government’s doors.

But political gains eluded him. He could not even become a member of the Legislative Assembly as the sway of Chaudhary Charan Singh over the Jats and some other agricultural classes in western Uttar Pradesh could not be dented.

Now two of Mahendra Singh Tikait's sons have brought the fight to Delhi. Naresh Tikait is the BKU chief and Rakesh Tikait its spokesperson.

But they lack the charisma and credibility which their father enjoyed. Rakesh Tikait contested the 2014 general elections from Amroha, a predominantly Jat constituency.

He could secure a little over 9,500 votes and ended fourth among the contesting candidates.

(Anil Maheshwari is a senior journalist, now based in Delhi, who has extensively covered news in Uttar Pradesh, Rajasthan and Himachal Pradesh since the eighties.)