Farmers' Protests: The tenth round of talks between the government and the protesting farmer unions is scheduled to be held on January 19. 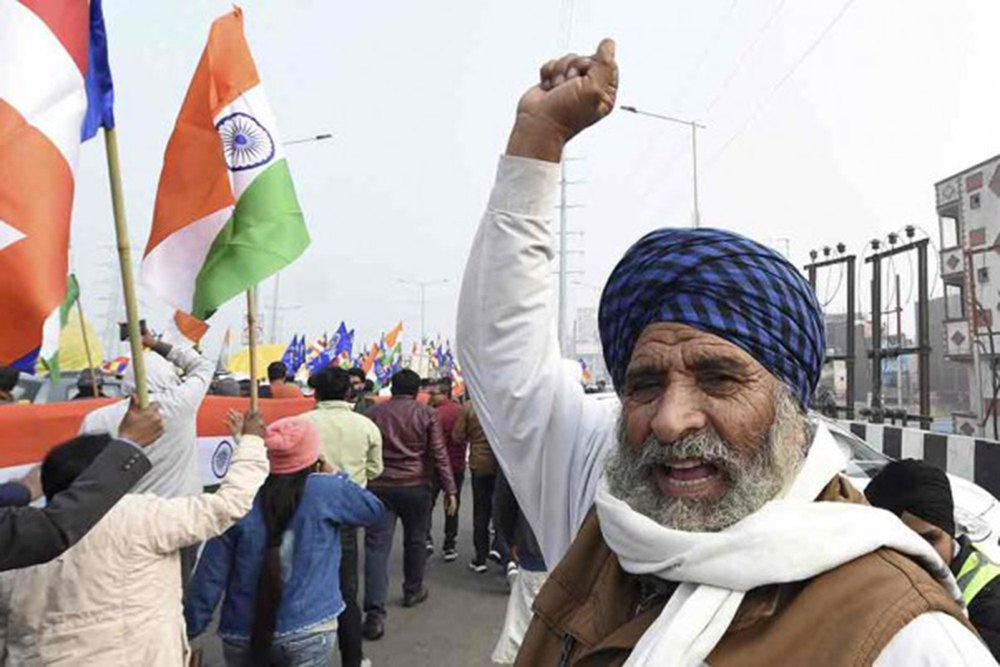 Farmers raise slogans during their protest against the new farm laws, at Ghazipur border in New Delhi.

The Supreme Court Monday heard a plea filed the Centre seeking an injunction against the proposed kisaan march, that is scheduled to be held on January 26, with protesting farmers saying they will carry out a tractor parade in Delhi on Republic Day.

While hearing the plea the apex court said that since it is a law and order issue, it falls under ambit of the Delhi Police and it is for them to decide on the matter. The SC bench headed by the Chief Justice of India also granted authority to the AG to invoke all powers under law as he deems fit to tackle the issue.

Earlier, Swaraj India President and Jai Kisan member Yogendra Yadav announced that the protesting farm unions will carry out a Tractor parade on the Outer Ring Road in the national capital on January 26.

"We will carry out a tractor parade on the Outer Ring Road in Delhi on Republic Day. The parade will be very peaceful. There will be no disruption of the Republic Day parade. The farmers will put up the national flag on their tractors,” Yogendra Yadav said while addressing a press conference at the Singhu border protest site on Sunday.

The actor, among the others, has been rallying for the protesting farmers against the agri reforms and was summoned by the agency on Sunday.

In response to the investigation, Badal said that the government of India is "trying to tire out farmers".

"Strongly condemn the centre's attempts to intimidate farmer leaders and supporters of Kisan Andolan (farmers' protest) by calling them for questioning by NIA and ED (Enforcement Directorate). They aren't anti-nationals. And after failure of talks for the 9th time, it's absolutely clear that GOI (the Government of India) is only trying to tire out farmers," he tweeted on Saturday.

Strongly condemn Centre's attempts to intimidate farmer leaders & supporters of #KisanAndolan by calling them for questioning by #NIA & ED. They aren't anti-nationals. And after failure of talks for the 9th time, it's absolutely clear that GOI is only trying to tire out farmers. pic.twitter.com/3x5T8VNdph

Another farmer union leader, Darshan Pal Singh, alleged that the National Investigation Agency (NIA) is filing cases against those who are part of the protest or supporting it. "All farmer unions condemn this," Pal said.

The tenth round of talks between the government and the protesting farmer unions is scheduled on January 19. On the same day, the Supreme Court-appointed committee to resolve the impasse will hold its first meeting.

The previous nine rounds of formal talks between the Centre and 41 farmer unions have failed to yield any concrete results to end the long-running protest at Delhi's borders as the latter have stuck to their main demand of a complete repeal of the three acts.

The Supreme Court had on January 11 stayed the implementation of the three laws till further orders and appointed a four-member panel to resolve the impasse. Bhartiya Kisan Union president Bhupinder Singh Mann, however, recused himself from the committee last week. Apart from Shetkari Sanghatana (Maharashtra) president Anil Ghanwat, agriculture economists Ashok Gulati and Pramod Kumar Joshi are the other panel members.

"We are meeting on January 19 at the Pusa campus. Only members will meet to decide the future course of action," Ghanwat told PTI on Saturday.

The Samyukta Kisan Morcha, in a statement, said, "The vehicles in the parade will consist of tableaus and floats that will reflect the agricultural reality of different states in addition to showcasing of historical regional and other movements."

"The vehicles will all fly India's national flag and will also have the flag of the farmer organisation that the members are affiliated with. No political party flags will be allowed," it said.

Thousands of farmers, mainly from Punjab, Haryana and western Uttar Pradesh, have been protesting at various border points of Delhi for over a month now demanding repeal of the three laws - the Farmers' Produce Trade and Commerce (Promotion and Facilitation) Act, the Essential Commodities (Amendment) Act, and the Farmers (Empowerment and Protection) Agreement on Price Assurance and Farm Services Act.

Enacted in September 2020, the central government has presented these laws as major farm reforms aimed at increasing farmers' income, but the protesting farmers have raised concerns that these legislations would weaken the minimum support price (MSP) and "mandi" (wholesale market) systems and leave them at the mercy of big corporations.

The government has maintained that these apprehensions are misplaced and ruled out a repeal of the laws.