Ready To Address All Concerns: Govt To Farmers At Crucial Meeting

Ahead of the meeting, Tomar and Goyal, along with senior union ministers Rajnath Singh and Amit Shah, had met Prime Minister Narendra Modi. 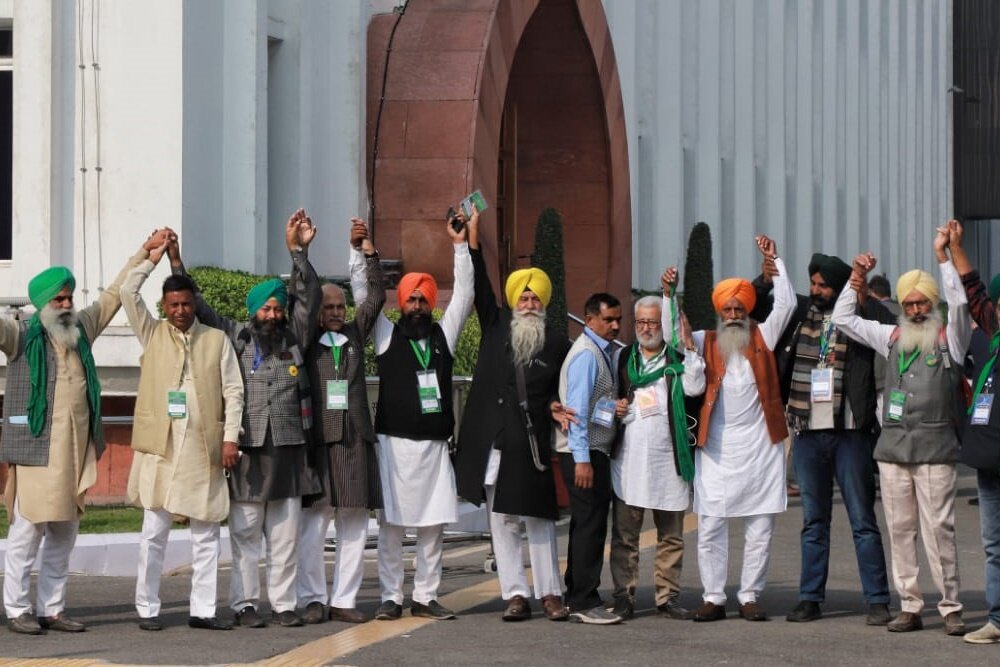 Farmers leaders from all Farmers unions arrived at Vigyan bhawan during a meeting with Union ministers over Farmers bill issue, in New Delhi

Seeking to break the deadlock over protests against new farm laws, the government on Saturday told representatives of agitating farmers that they are ready to address all their concerns with an open mind, sources said.

At the beginning of the fifth round of talks here at Vigyan Bhawan, Union Agriculture Minister Narendra Singh Tomar told a group of 40 representatives of various farmer unions that the government is committed to cordial talks and welcomed all positive feedback on the new farm laws, sources said.

Later, Minister of State for Commerce Som Parkash, an MP from Punjab, addressed the leaders in Punjabi and said the government understands the sentiments of Punjab.

"We are ready to address all your concerns with an open mind," a source quoted Parkash as telling the union leaders.

The talks between the government and the protesting unions began around 2.30 pm and was also attended by Railway, Commerce and Food Minister Piyush Goyal.

In his opening remarks, Tomar, who is leading the talks for the Centre, said the government is committed to "peaceful talks with farmers' leaders and does not intend to hurt farmers' sentiments".

The agriculture minister welcomed feedback on the three farm laws, while agriculture secretary Sanjay Agarwal summarised the proceedings of the previous four rounds of talks with farmer unions during the meeting, sources said.

The two sides are believed to have discussed contentious issues like provision of dispute resolution and registration of traders in proposed private mandis under the new laws.

Ahead of the meeting, Tomar and Goyal, along with senior union ministers Rajnath Singh and Amit Shah, had met Prime Minister Narendra Modi to deliberate over proposals likely to be made to the agitating groups.

Modi's decision to hold deliberations with Union ministers, who have so far been the face of the Centre’s efforts to end the farmers’ agitation, signifies the importance the prime minister has attached to defuse the crisis, sources said.

On Thursday, talks between the Union ministers and a representative group of thousands of agitating farmers had failed to yield any resolution, as the union leaders stuck to their demand for the repeal of new farm laws despite the government offering to "discuss and consider with an open mind" some key points of concern raised by farmers in the three new laws.

Farmers on Friday announced a 'Bharat Bandh' on December 8 and threatened to intensify their agitation and block more roads leading to the national capital if the government does not accept their demands.

Enacted in September, the three farm laws have been presented by the government as major reforms in the agriculture sector that will remove the middlemen and allow farmers to sell anywhere in the country.

However, the protesting farmers have expressed apprehension that the new laws would pave the way for eliminating the safety cushion of Minimum Support Price and scrap the mandis, leaving them at the mercy of big corporates. The Centre has maintained the MSP and mandi systems would continue and would be rather further improved and strengthened.

Undeterred by the winter chill, thousands of farmers have stayed put at various border points of Delhi for the past nine days as part of their protest against the Centre's farm laws.

Before the start of the meeting, an All India Kisan Sabha functionary said only repealing of the new farm laws will end the stalemate.

"At this juncture, we have transport unions, retail businesses and other associated groups who have shown solidarity with us. Our movement is not just about farmers," AIKS finance secretary Krishna Prasad said.

Outside the meeting venue, employees of the Indian Tourist Transporters Association (ITTA), which has supplied vehicles for the transit movement of the protesting farmers, were seen holding a banner which read 'We support farmers' and shouting slogans backing the peasants' agitation.

"I belong to a farmer's family. I can relate to their fears. We had farmland at Mahipalpur and now you see T-3 terminal out there. We are supporting the protesting farmers in their cause," IITA president Satish Sehrawat told PTI.

He said the association is providing transportation facility to the farmers since their first meeting.

Bharatiya Kisan Union (Rajewal) state general secretary Onkar Singh Agaul said: "Our demand remains the same that the government should withdraw all three farm laws. We want MSP should be guaranteed through law".

He also sought scrapping of electricity amendment law and an ordinance on stubble burning.

BJP leader from Punjab Surjit Kumar Jayani, while entering Vigyan Bhawan along with his party colleague Harjeet Singh Grewal, hoped the issue will be resolved soon.