More than Rs. 19,500 crores transferred directly into the accounts of over 9.75 crores beneficiary farmer families 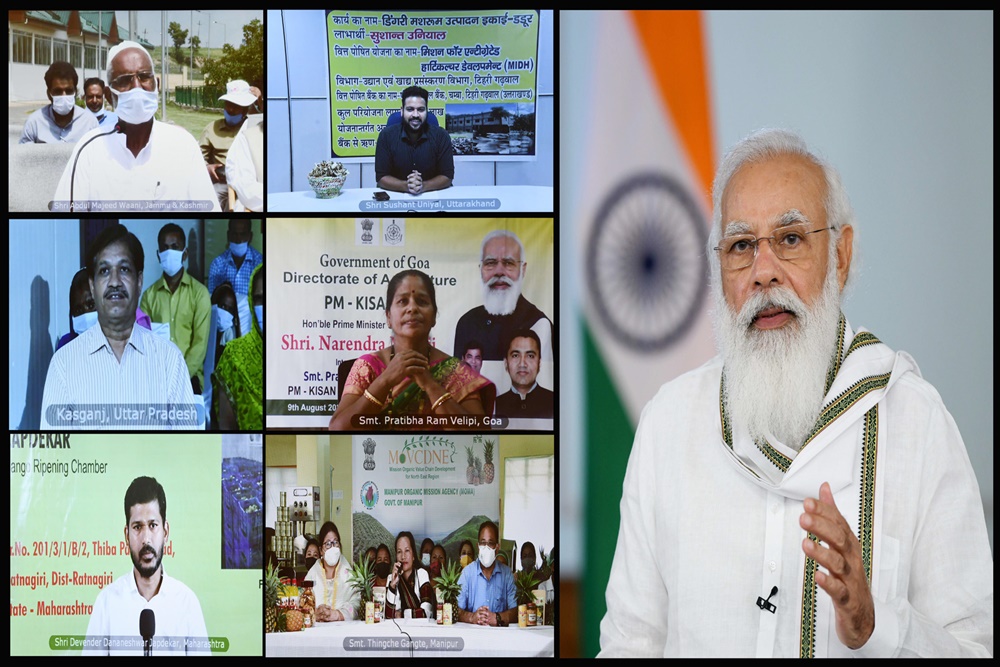 Under PM Kisan Samman Nidhi, Rs. 1 lakh 60 crores have been given to farmers so far.

This enabled the transfer of more than Rs. 19,500 crores to over 9.75 crores beneficiary farmer families.

Prime Minister Modi spoke of the sowing season and expressed the hope that the amount received today will help the farmers. He also mentioned that the scheme of Kisan Infrastructure Fund with Rs. 1 lakh crores corpus also completes one year today.

During his address, he touched upon initiatives like Mission Honey-Bee and making saffron from Jammu & Kashmir in the NAFED shops. Honey mission has led to 700 thousand crore export of honey resulting in extra income for farmers.

Referring to the upcoming 75th Independence Day, he said that apart from being an occasion for pride, it is also an opportunity for new resolutions.

“We have to take this opportunity to decide where we want to see India in the coming 25 years,” he said.

Prime Minister Modi stated that our agriculture and our farmers have a big role in determining the condition of India in 2047, when the country completes 100 years of independence.

“It is time to give direction to India's agriculture to face new challenges and take advantage of new opportunities,” he said, calling for changes in the Indian agriculture according to the demands of changing times.

He lauded the farmers for record production during the pandemic and outlined the government’s measures to reduce the hardships of farmers during the difficult period.

The Government ensured uninterrupted supply of seeds, fertilizers, and access to markets. Urea was available throughout and when prices of DAP increased manifold in the international market, the government immediately arranged Rs. 12,000 crores.

Speaking of minimum support price (MSP), the Prime Minister said the Government has made the biggest ever purchase from farmers at MSP, be it Kharif or Rabi season.

“Today, when the country is remembering the Quit India Movement, on this historic day, this resolve fills us with new energy,” he said.

He also pointed out that today, for the first time, India has reached among the top-10 countries of the world in terms of agricultural exports.

The Prime Minister remarked that the small farmers are now being given utmost priority in the agricultural policies of the country. With this spirit, in the last few years, serious efforts were being made to provide convenience and security to these small farmers.

Under PM Kisan Samman Nidhi, Rs. 1 lakh 60 crores have been given to farmers so far. Out which Rs. 1 lakh crores were transferred to small farmers during the pandemic period.