Despite the COVID-19 pandemic and the surge in infection, farmers have been working on their fields. They have even taken the crop to mandis which had to operate with health and hygiene protocols in place. And since the beginning of the current procuring season, a total of 292.52 LMT of wheat has been procured as of May 2, Sunday.

Food Corporation of India data indicates that Punjab, Haryana, Madhya Pradesh, and Rajasthan are likely to meet the estimated target of procurement of wheat.

About Rs. 17,495 Crore has already been transferred directly into Punjab farmers’ account during ongoing Rabi Marketing Season 2021-22, according to Ministry of Consumer Affairs, Food & Public Distribution.

This is for the first time that the farmers of Punjab have started receiving payments directly into their bank accounts against sale of their wheat crop. 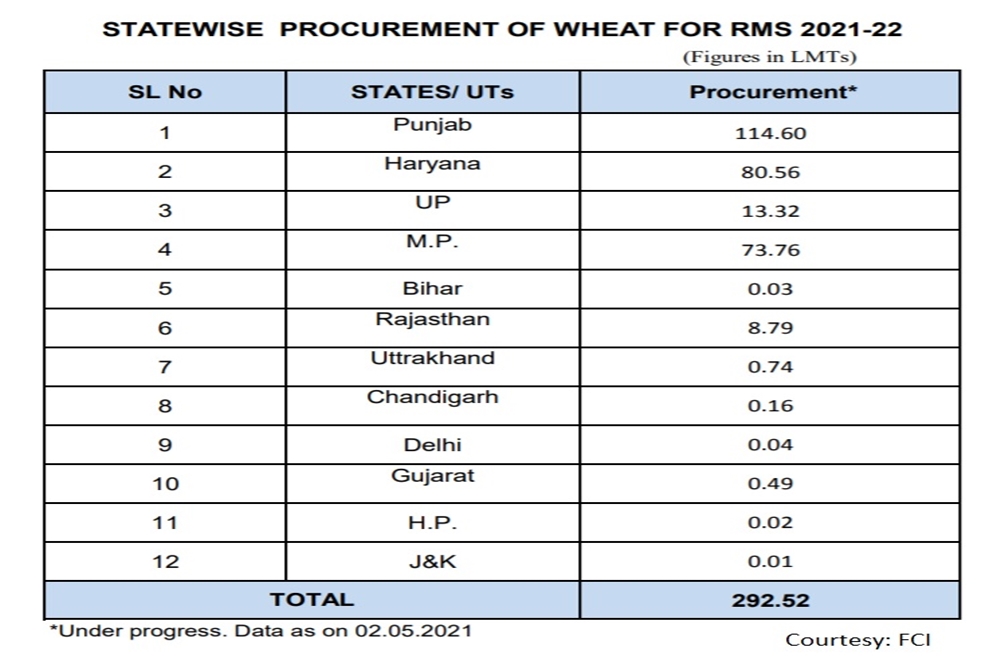 According to Secretary, Mandi Board and Director Food & Civil Supplies, Ravi Bhagat, Punjab’s targeted procurement of wheat in the ongoing Rabi Marketing Season is 130 LMT.

The state has already procured 114.60 LMT as of Sunday.

Haryana and Madhya Pradesh follow with 80.56 LMT and 73.76 LMT, respectively.

However, till Sunday, Uttar Pradesh has procured 13.32 LMT against an estimate of 55 lakh tonnes.

Similarly, Bihar has procured only 0.03 LMT of wheat in the same period. Reports suggest that the state is not able to arrange the minimum support price (Rs 1,975 per quintal) for wheat.

Meanwhile, Punjab government has instructed officials to maintain vigil and ensure action against illegal transportation of wheat from other states. Wheat is allegedly procured at cheaper rates elsewhere and sold in Punjab as per MSP.