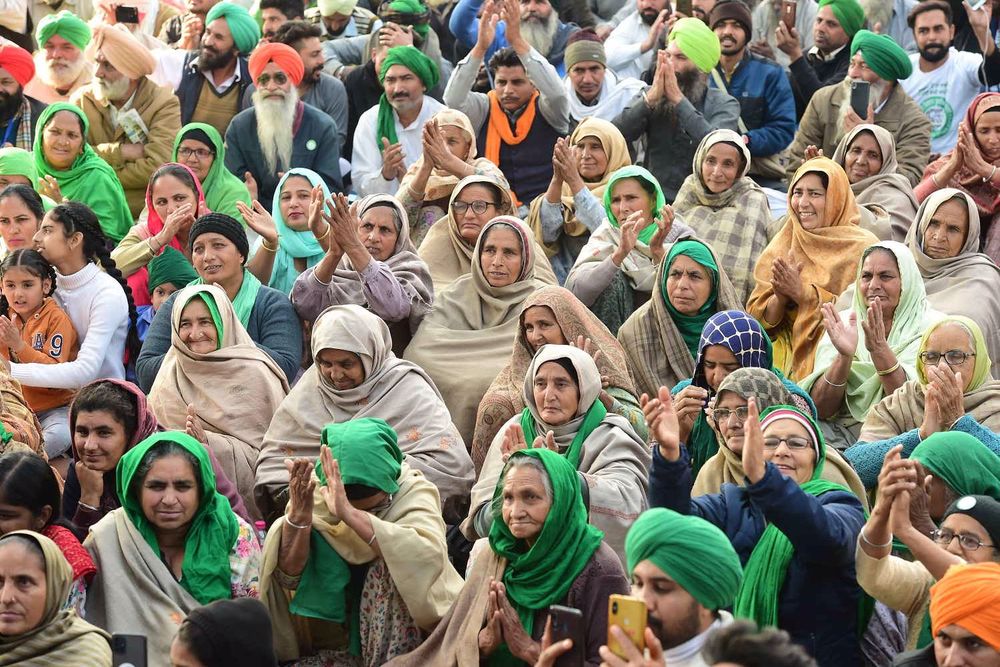 A very significant phenomenon in the ongoing farmers movement is that of huge participation of women, specially since the observance of ‘Women Farmers Day’ on January 18 at the call of Samyukt Kisan Morcha. Not that they were so far unaware of the happenings around, but they found themselves at more liberty to actively join the movement even independently when almost the whole rural communities were already on the move. The unprecedented participation of women in the ongoing farmers movement is something we are all looking at with a lot of hope. The active and aggressive involvement of women in this movement in different colours and through different mediums is something we need to closely look at and understand to drive lessons for the future. Some of the main slogans of the movement that can be heard in both villages and on the borders like “Kisan-Majdoor Ekta Zindabad, Mahila Kisan Mazdur Ekta Zindabad, Punjab Haryana Bhaichara Zindabad” also indicate that there is stress on bringing more and more sections under one umbrella. There is also a lot of emphasis on establishing the brotherhood of Haryana and Punjab farmers.

This movement is unprecedented in its motivation towards breaking social political boundaries between communities to live and fight together as opposed to what the mainstream politics of the region has been actively engaged in. Not long ago, we saw mainstream political party trying to cash in on the issue of Jat reservation in Haryana creating very deep divide between communities. We also saw Haryana BJP ministers trying to rake in the old SYL (Satluj Yamuna Link Canal) issue just as the farmers were getting ready for the Delhi protests. However, it all failed against the resolve of the farmers who have faced violence, prison sentences, barricades, water cannons and have successfully created solidarities previously unheard of. In the beginning of the movement there have been call of SaMyukt Kisan Morcha in support of all India ‘bandh’ calls of employees and workers. Recently, the farmers organised big panchayats with agricultural workers. Some of those gatherings saw massive participation of women including those in the regions like Mewat with relatively more backward socio-cultural milieu witnessing huge participation of women. Educated young women also addressed these panchayats, presided over by local Maulanas. The farmers union deserve full credit for being able to at least partly bridge gender, caste, class and other socio-cultural barriers in pulling people towards the movement. Today, community organisations like Khap Panchayats are sharing stage with Dalit and women organisations. When a movement starts assuming a mass character it acquires the potential to assimilate almost everything in its fold, no matter how incompatible they may appear. The same is true for the ongoing farmers’ struggle. Started in the beginning by the joint platform of various unions it acted as a trigger to the already accumulated discontent among the rural people in general, and farmers in particular.

Initially, mass participation from Punjab, followed by Haryana and the huge build up at the borders led to a point when the people after a long time saw for themselves that this government can also be made to succumb, though it showed a brave face and giving an Illusion of steadfastness. A duel phenomenon of surrender and resort to repression went on and the farmers left no stone unturned in defending the livelihood as well as their dignity under threat from a regime intoxicated with unbridled power.

Haryana has been far behind Punjab in terms of higher level of organised society – socially and culturally. It is in this background that a kind of much larger vacuum existed in Haryana specially when the BJP has a much more narrow social base since the last assembly elections. When the opposition parties still remain at the margins of the otherwise non-political farmers movement. So the sway of the movement and the necessity to strengthen it made most of the social groupings including the Khap outfits to move. The traditional Institution of Khaps do continue to survive, though undergoing some changes over the decades, in their character in terms of acquiring even the characteristics of politicisation.

The vacuum in a way started to be filled within the span of few weeks from the build up around the borders with varied community groups. Though Khaps also threw their weights within their respective regions but it would not be correct to perceive that it is only the Khaps that dominate the scene and no other forces are operating. Gurudwaras, youth clubs, retired employees, ex-servicemen, and even Dalit groups, trade unions and various scheme workers are playing a role in mobilizing logistics for the thousands sitting at the borders. Scores of “langars” (community kitchens) being run on highways with collective effort of common villagers and farmers, including the All India Kisan Sabha. At the same time, it is often more convenient for the people following various political parties or even the various farmers outfits to join their hands under the Khap umbrella without causing any inter party political hostility.

The unprecedented historical events need new understanding as it opens new spaces which were so far restricted to the dominant and the privileged. Those who have been working in these areas, the so-called 'forces of change', need to understand the full potential of this movement and make their best contribution. Food security is one of those issues that touches the lives of people across different sections in more ways than one. Implementation of these three agricultural laws will be the eventual end of all that we have gained by fighting for years.

As far as women's participation is concerned, they have fully understood the huge setback the Modi government's policies have brought to their already burning demands. This would be the end of whatever little ownership of agricultural land they have (13% according to agri census of 2015-16) and welfare scheme entitlements. Even Mandi and agricultural work will eventually get a huge hit along with what remains of the PDS, ‘anganwadi’ and midday meals. These are some of the sectors where women have crucial dependence for their livelihood. The fact that women have understood the extent of this attack on their livelihood is clear from the participation – though in limited numbers – in the agitation right from when farmer leaders were arrested in Haryana before the call for November 26 for “Delhi Chalo”. Along with this, the way Punjab farmers fought all challenges posed by the Haryana Government and moved towards Delhi borders gave all sections of people a much-needed hope that things can be changed.

People from Punjab have always had the shining examples of Bhagat Singh, the Gadari Babas, Mai Bhago, and Baba Nanak – whose sacrifices have very organically become the guiding lights for most of the movements ever since the days of pre-partitioned Punjab. The anger amongst farmers was brewing for a long time in India but now has taken the shape of a revolution with support from masses of people from different sections.

At this juncture what people want to achieve from movement is not limited to reversal of Agricultural laws but also to bring the ANDATTA (bread earner) in focus.

The long-standing crisis in the farming sector has taken its toll on the minds and bodies of women in the rural belt. They work hard for more than 12 hours a day, with minimum nutrition, and still see no end to the sufferings of their children. Many of them have lost their husbands to this acute crisis. All their pent-up anger towards their ever-increasing debt, landlessness unemployment, alcoholism, drug addiction and the bleak future of their children, devaluation of their labour at home and outside has pushed them into this moment. The farmers’ movement has channelled their anger and inspired them to stand up and fight.

Today women, children, elders, and even cattle, are part of the movement. Women sit at the forefront of the stage. In the songs and speeches, they speak of their experiences of exclusion. Whatever responsibility they are given, they play it with utmost commitment and seriousness. Equipped with a new conviction to fight, even elderly women can be seen trying to contribute towards the cause by stitching flags, etc. Their role this time is different from the past in one important aspect – that they are now in the movement as an actor and not as spectators.

Not only women, but also for men – this movement has led to a big change in the context of patriarchy. Earlier, they used to look at women doing social work lightly; but now they are seen full of respect for them. Domestic work is now being recognised. Now if their wife, mother, and sister should go to the movement to raise slogans, give speeches, they feel honoured. Our own activists in their 35 years of activism never enjoyed the relationship of trust of that level with their menfolk.

Even though a large number of women involved in these movements come from the peasant families, women belonging to the landless poor sections who have been involved in the labour movement and other unions have been a part of them from the beginning. Now the participation of those sections is increasing. Many new faces and new aspirations are visible in this agitation. At least one thing is sure, that there will not be business as usual for women in the aftermath of the Kisan movement.

Major concern for the farmer unions and women movement now remains. One is how to sustain this upsurge for assertion among women. Here the case of BKU (Ugrahan) is there to be emulated. As one of the largest farm union in Punjab, it has succeeded in having 40% women among its membership, which is reflected at different levels of leadership as well.

A woman leader of this union has stated that this welcome feature is owing to the combining of the agrarian issues with social issues specially the campaign against drug addiction, alcoholism, and safety and security of women. Let it be recalled that this menace is no more confined to Punjab alone but has spread to other states as well.

(The views expressed by the author are personal and do not in any way represent or reflect the views, policies, or position of Outlook Krishi or OutlookIndia)